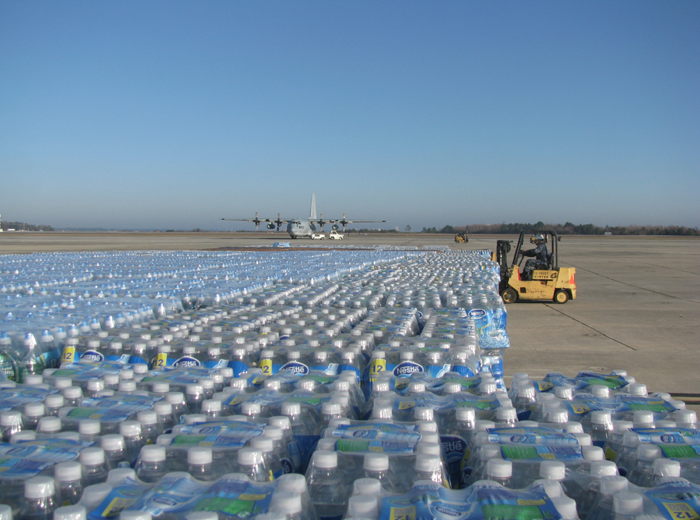 The company is exporting a seriously limited resource with no oversight (Credit: Nat Ulrich/Shutterstock)
As residents of California are urged to conserve water and the state considers placing a mandatory restriction on outdoor water usage, Nestlé is trucking away undisclosed amounts of the precious resource in the form of bottled water.
The Desert Sun has an in-depth report of controversy brewing around the company’s bottling plant, which draws water from a drought-stricken area for its Arrowhead and Pure Life brand water. Because the plant is located on the Morongo Band of Mission Indians’ reservation, it’s exempt from oversight by local water agencies and is able to keep confidential information — such as the amount of groundwater it’s pumping and water levels in its wells — that other plants would be required to disclose. As a result, critics contend, it’s impossible to know just how much of the limited resource the plant is extracting to send elsewhere.
Here’s more from the Desert Sun:


“They’re entitled to use the groundwater basin, too. Everyone is. But it’s just a shame that this water is not being used locally. It’s being exported,” said David Luker, general manager of the Desert Water Agency. He said DWA’s position has been that the Morongo tribe should have to report its water use just like other entities.
“I don’t believe there’s any way to force them to fork over groundwater pumping information unless there’s discovery in a lawsuit,” Luker said. But he said the level of concern about the bottling plant in the area doesn’t seem to have grown to a degree that leads to such action.
Other concerns are raised by people who live in a neighborhood of mobile homes near the bottling factory. Some say they wish the plant would provide more jobs because many are unemployed. Others say despite living next to the Arrowhead plant, their local water service is poor, with sputtering faucets and frequent breaks in water lines.

“The reason this particular plant is of special concern is precisely because water is so scarce in the basin,” Peter Gleick, who wrote the book on bottled water, told the Desert Sun. “If you had the same bottling plant in a water-rich area, then the amount of water bottled and diverted would be a small fraction of the total water available. But this is a desert ecosystem. Surface water in the desert is exceedingly rare and has a much higher environmental value than the same amount of water somewhere else.”
Nestlé refused to let the Desert Sun tour the Morongo facilities or release any data about water levels in its wells, but in an emailed statement stood by its operations. “We proudly conduct our business in an environmentally responsible manner that focuses on water and energy conservation,” the company said. “Our sustainable operations are specifically designed and managed to prevent adverse impacts to local area groundwater resources, particularly in light of California’s drought conditions over the past three years.” What that ignores, however, is the basic fact that bottled water is anathema to the concept of environmental responsibility: we’re talking about a process that uses multiple times the amount of water bottled just to produce its packaging. Drought aside, the controversy highlights some of the basic contradictions of the $12.2 billion industry — and if there’s anything that’s going to open our eyes to its wastefulness, this should be it.

Written by;
Lindsay Abrams is a staff writer at Salon, reporting on all things sustainable. Follow her on Twitter @readingirl, email labrams@salon.com.

And From the Desert Sun

(Photo: Photo illustration by Michael Snyder/ The Desert Sun )
10464 CONNECT 4 TWEET 49 LINKEDIN 59 COMMENTEMAILMORE
CABAZON – Among the windmills and creosote bushes of San Gorgonio Pass, a nondescript beige building stands flanked by water tanks. A sign at the entrance displays the logo of Arrowhead 100% Mountain Spring Water, with water flowing from a snowy mountain. Semi-trucks rumble in and out through the gates, carrying load after load of bottled water.
The plant, located on the Morongo Band of Mission Indians' reservation, has been drawing water from wells alongside a spring in Millard Canyon for more than a decade. But as California's drought deepens, some people in the area question how much water the plant is bottling and whether it's right to sell water for profit in a desert region where springs are rare and underground aquifers have been declining.
MORE: Beyond Drought coverage from The Desert Sun
"Why is it possible to take water from a drought area, bottle it and sell it?" asked Linda Ivey, a Palm Desert real estate appraiser who said she wonders about the plant's use of water every time she drives past it on Interstate 10.
"It's hard to know how much is being taken," Ivey said. "We've got to protect what little water supply we have."
Over the years, the Morongo tribe has clashed with one local water district over the bottling operation, and has tried to fend off a long-running attempt by state officials to revoke a license for a portion of the water rights. Those disputes, however, don't seem to have put a dent in an operation that brings the Morongo undisclosed amounts of income through an agreement with the largest bottled water company in the United States.
MORE: Environment news from The Desert Sun
The plant is operated by Nestle Waters North America Inc., which leases the property from the tribe and uses it to package Arrowhead spring water as well as purified water sold under the brand Nestle Pure Life.
The Desert Sun has repeatedly asked the company for a tour of the bottling plant since last year, but those requests have not been granted. The company and the Morongo tribe also did not respond to requests for information about the amounts of water bottled each year.
Until 2009, Nestle Waters submitted annual reports to a group of local water districts showing how much groundwater was being extracted from the spring in Millard Canyon. Reports compiled by the San Gorgonio Pass Water Agency show that the amounts drawn from two wells in the canyon varied from a high of 1,366 acre-feet in 2002 to a low of 595 acre-feet in 2005. In 2009, Nestle Waters reported 757 acre-feet pumped from the wells during the previous year.