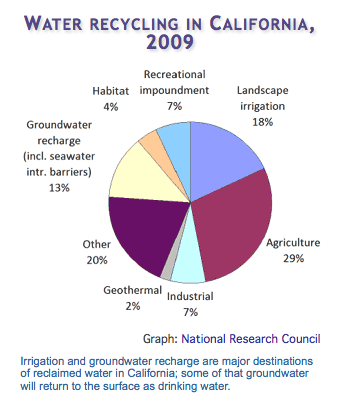 Should “wastewater” be wasted?

In hot, dry places, water recycling has joined water conservation as a weapon against water shortages. After being treated at a sewage plant, wastewater is increasingly used for irrigation, industrial purposes, restoring groundwater, and after further purification, for drinking.

About 0.1 percent of the municipal wastewater treated in the United States is reused for potable (drinking) water, according to a new National Research Council report. That may sound trivial, but “reclaimed water can account for the majority of the drinking water supply in some areas,” the report said.
In general, those areas have taken every reasonable measure to clamp down on water waste before embarking on the more dicey path of reuse. Drinking water is a small part of the growing movement toward reuse; far more common is the recycling of water for irrigating farms and landscapes, recharging groundwater, and for cooling generators and other industrial equipment.
But recycling for potable water is a growing trend in the Middle East, Australia, California and Florida. Miami-Dade County, Florida is about 80 percent through a project at a sewage plant that will use microfiltration, reverse osmosis, advanced oxidation and ultraviolet disinfection to disinfect partially treated wastewater. Each day, 21 million gallons of water “whose quality will be near that of distilled water” will be piped from a moat at the Miami Metrozoo. From there, the water will percolate into the ground to recharge groundwater.
The interest in reuse coincides with a need to update potable water-treatment plants, to the tune of $200 to $300-billion over the next 20 to 25 years. These effluent pumps are part of a long-term upgrade to the Miami sewage treatment plant, intended to provide treated water clean enough to recharge groundwater. The upgrades cost about $600 million.
Photo: Miami-Dade County
In 2002, Florida was recycling the most wastewater, followed by California, Texas and Arizona.
The 2004 Guidelines for Water Reuse from the Environmental Protection Agency (EPA) estimated total U.S. water reuse at 1.7 billion gallons per day, with a growth rate of 15 percent per year.
But that’s just an estimate; the comprehensive Research Council report could not find solid numbers on current water recycling in the United States. “In 30 years we have not made a concerted effort in the United States to even figure out how much water we are reusing,” says Anders Andren, a professor of environmental chemistry and technology at the University of Wisconsin-Madison, and director of its Sea Grant Institute.
Globally, the estimate on total (not just potable) water reuse was 5.5 billion gallons per day.

Drink in the irony

If you’re gagging at the idea of guzzling highly treated wastewater, you may already be doing so, courtesy of “de-facto reuse.” The treated effluent discharged by wastewater plants often winds up in rivers, streams and lakes, and can easily enter intakes at downstream water utilities.
“Nobody has tried to figure out where we are in the United States by doing a quantitative survey of de facto reuse,” says Andren, meaning an unknown number of water utilities are delivering drinking water containing an unknown amount of treated wastewater.
If drinking water meets federal water-purity standards, it’s safe, but the issue of de facto reuse does merit further study. “This is the kind of thing every water system ought to be looking at, where the source water is coming from, and what is its quality,” says Henry Anderson, adjunct professor of population health science at the University of Wisconsin-Madison. In most cases, he says, the quality of the intake water is already a factor in deciding how to treat potable water.
On a per-capita basis, Israel, Singapore and Australia are leaders in water reuse. In every case, the local culture, economy, environment and demand for water affect how water is treated and used.
Here, we’ll concentrate on drinking water — the most demanding aspect of water reuse. Because it’s not legal to connect a drinking-water system directly to a sewage plant outfall in the United States, the treated effluent must reside in groundwater, surface water or a container for a while before it is piped to the water-treatment plant.
This delay provides a second layer of protection called “environmental attenuation,” says Anderson, who helped write the recent Research Council report. “The concern of the committee is that no system works with 100 percent efficiency all the time. If you are using a membrane to treat wastewater and it tears … we want multiple layers of protection.”
During attenuation, the treated wastewater can be mixed with surface water or groundwater, and then the water will go through the complete process for treating potable water, Anderson says.

To block salt water from polluting groundwater in Southern California, treated effluent is pumped underground; some of this effluent is expected to end up in drinking water.

Tiny Cloudcroft, N.M., a mountain town with severe water shortages, recently began treating 100,000 gallons of wastewater daily for the drinking-water supply. To satisfy federal rules, the water is withheld from the drinking water supply for at least 40 days.


How clean is safe?

Courtesy Livingston Associates, P.C. , Consulting Engineers, Alamogordo, N.M.
Equipment for removing solids, bacteria, and viruses from treated sewage water, were shown in a proposal for Cloudcroft, N.M. ROLL OVER photo to see hardware of reverse osmosis, which removes dissolved solids and other pollutants.
Science and technology play dual roles in the adoption of water recycling. Improving water purification technology is offering an increasing number of choices. But technology costs money, and drinking water that comes from ground- or surface water is almost always cheaper than reclaimed drinking water.
But science is also able to detect an increasing number of contaminants in drinking water, and at ever-lower doses. In recent years, this analytical equipment has raised worries about hormones and pharmaceuticals in wastewater that have added to traditional worries about pathogens.
However, these highly accurate chemical-detection methods can raise spurious warnings, says Andren, an expert in water purification techniques. “Analytical capacities are such now that you can find literally everything, but they may pose no health hazard at those concentrations. It’s getting to the point that we can detect a thousand molecules in a liter of water, but this does not necessarily mean there’s anything wrong with the water.”

Water treatment plants come in two varieties. Some treat sewage, and others treat drinking water. In essence, water recycling creates a loose connection between these two plants, although federal law requires that treated wastewater be mixed and stored before it enters a plant treating potable water.
Both types of water plant already use multiple steps for treating water, but recycling has entailed an increase in the amount and intensity of treatment.
The specific treatment methods depend on the nature of the incoming water stream, which could come from sewage treatment plants, street runoff or industry. “The incoming streams can vary so much, in composition, type, quality and quantity,” he says.
Technologies must be chosen to deal with the situation, says Andren. “In certain instances, the main problem is getting rid of salt, in others it’s getting rid of bacteria, or pharmaceuticals, or organic chemicals or metals. It depends on the source water.”

These measures can be used to recycle wastewater into drinking water:

Filtration: Water is forced through advanced filters to remove high percentages of bacteria, viruses and protozoa. Creating that pressure takes considerable electricity, and the removal efficiency varies by the type of filter and the target for removal.

Reverse osmosis: In osmosis, dissolved chemicals move away from areas with higher concentrations; in reverse osmosis, special membranes cause these chemicals to move in the opposite direction, leaving the side of the membrane with treated water. The process creates a large amount of brine, and therefore is mainly used near the ocean, where this brine can safely be disposed. Even though per-capita use in the United States is declining, recycling makes a lot of sense in water-short regions, says Andren. In the United States, “about 12 billion gallons a day [of 32 billion gallons treated per day] is shot into estuaries and oceans. In areas with generally high populations we are shooting away this water and will never have our hands on it again. If just a part of that could be reused, that would be good.”

Per capita water usage in the United States National Research Council
Irrigation and industrial use has declined for 50 years, but public use has increased.
But due to cost, recycling will only interest places with significant water shortages, Andren says. “We can do a great job at a cost, we can do anything at a cost.”
Ramping up reuse depends on introducing new technology, but that is a natural outgrowth of the steady introduction of sophisticated ways to clean wastewater and drinking water.
Andren, who reviewed the recent National Research Council report, says, “One of the major recommendations is that we basically have the treatment technology, and the approach to assess the hazards through risk assessment. Now we have to formalize that and work together on federal guidelines on how to start using more reclaimed water in daily life.”
Although a water shortage is not healthy, recycling, even if it increases supply, must still overcome the obvious “ecch” factor. “A lot of people ask, ‘If you have effluent from a sewage plant, and it goes through treatment, would you drink that?’” Anders says. “Absolutely, the technology is there, it’s being done all over the world. Our treatment technology and our ability to determine the quality of the water are such that it can be absolutely safe; it can be better than what you presently get out of the tap.”