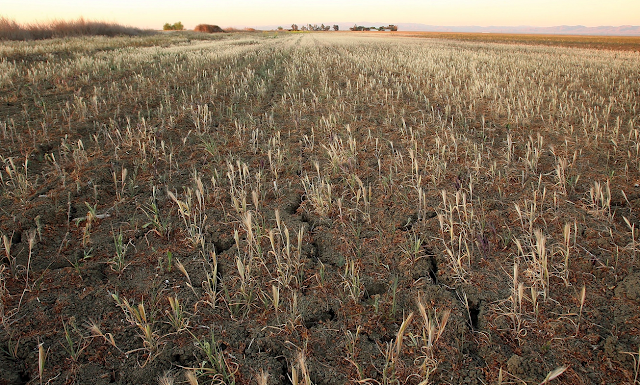 On a day when the skies were ashen from the smoke of distant wildfires, Chase Hurley kept his eyes trained on the slower-moving disaster at ground level: collapsing levees, buckling irrigation canals, water rising up over bridges and sloshing over roads.
This is the hidden disaster of California’s drought. So much water has been pumped out of the ground that vast areas of the Central Valley are sinking, destroying millions of dollars in infrastructure in the gradual collapse.
Four years of drought – and the last two years of record-smashing heat – have put water in extremely short supply.
Such climate-charged scenarios form the backdrop to the United Nations negotiations starting in Paris on 30 November, which are seeking to agree on collective action to reduce greenhouse gas emissions.
But the real-time evidence of climate change and the other effects of human interference in natural systems are already changing the contours of California’s landscape.
The strongest El Niño in 18 years is expected to bring some drought improvement to the Central Valley this winter, but the weather system won’t end it, according to the National Oceanic and Atmospheric Administration.
The Central Valley is the world’s largest patch of class one soil, considered to be the best for crops, and produces about 40% of the country’s fruits, nuts and vegetables.
In some parts of the valley, however, the land is sinking at a rate of 2in (5cm) a month. About 1,200 square miles, roughly bounded by interstate 5 and state route 99, is collapsing into what scientists describe as a “cone of depression”.
“The land around here is sinking, and as it is sinking, the bridge is going with it,” said Hurley, manager of the San Luis Obispo water company, on a tour of sinking infrastructure near the town of Firebaugh.
The water company, which is owned by area farmers, had recently rebuilt the levee, he said. But “because the water is hitting the bridge, they are going to have to reconstruct the bridge”. Wellheads were being destroyed, because they could not maintain pressure. Dams were sinking. “I am having a hard time pushing water through my canal,” Hurley said.

Advertisement
The sinking is a consequence of farmers’ desperate efforts to stay in business after California began cutting off their access to rivers and reservoirs because of the drought.
The farmers began a literal race to the bottom, going underground, drilling new and deeper wells, and pumping so much water from the layers of sediment, sand and clay that it is causing the ground to collapse.
The sinking is worse in this part of the valley because it is rich in clay. Pumping pulls the water out of the clay pores, causing the clay layer to collapse. “The issue is the amount of deepwater pumping below the clay. That is what is causing the subsidence,” Hurley said. “The land is sinking as they extract the water below the clay; there is a pressure differential. It is pulling the water out of the clay layer, and when it does, the clay collapses. And as it collapses, it brings everything with it.”
•••
On a mid-September day with temperatures reaching above 100F (38C), Steve Arthur took shelter in his air-conditioned truck in a prune orchard near the town of Merced, while overseeing a crew drilling a new well.


The harvest was over and the owner had left the trees to fend for themselves. The leaves were so dry they crackled. As the rig bore into the earth, wet clay slopped out, landing in a heap.
Arthur, whose family has been drilling water wells in the Central Valley since the 1950s, estimated he had drilled 10 new wells a month during the drought.
There was no way of keeping up with demand – even favoured customers were told they would wait months, if not years. In one week, he said, he installed more than 5,000ft of well casing.

Advertisement
The harvest was already over, and the farmer had no water to spare for the trees. But they must still be sustained, Arthur said. “If you can’t pump any water, everything will die. These crops cannot go a year without water. Everything you see for miles will be dead.”
Arthur recognises that farmers are trapped in this race to the bottom. The Central Valley is the second most pumped aquifer system in the country, according to the US Geological Survey.
His family runs their own small almond orchard near his home in Fresno. Last year his own well ran dry, because the water table dropped so low.
Arthur goes on at length about the importance of agriculture to the Central Valley, to the country. He has no patience with the authorities’ decision to cut off farmers and protect the state’s rivers – seeing it as a misguided attempt to preserve fish.
But even Arthur recognises that there are costs to pumping out the water beneath during these years of drought. “Are we over-pumping? I am sure they are probably doing that now because they don’t have any choice,” Arthur said.
•••
California records stretching back to the 1920s show the water table dropping during times of drought and recovering somewhat during years when there was heavy snowfall in the Sierra Nevada. The snowpack provides almost a third of California’s water supply.
The state has also experienced subsidence, with an emblematic picture of a stranded road sign exhibiting the drop.
But the deepening drought in 2015, along with a snowpack in the Sierra Nevada at a 500-year low, made the drop bigger and deeper.

These crops cannot go a year without water. Everything you see for miles will be dead

“Because of increased pumping, groundwater levels are reaching record lows – up to 100ft lower than previous records,” Mark Cowin, the director of California’s department of water resources, told reporters in August at the release of a subsidence report. “As extensive groundwater pumping continues, the land is sinking more rapidly and this puts nearby infrastructure at greater risk of costly damage.”
The California legislature last year voted to direct the state’s water agencies to come up with plans to guarantee supplies into the future.
Satellite data, analysed by University of California at Irvine scientists, suggest that the state has been losing about 4tn gallons of water a year from the Sacramento and San Joaquin river basins since the drought began in 2011.
The satellites use highly sensitive gravity measures to monitor changes in the amount of water stored underground in soil and rock.
According to Jay Famiglietti, a water scientist at Nasa’s jet propulsion lab in Pasadena and a professor at UC Irvine, two-thirds of the lost water has been sucked out of aquifers in the Central Valley, causing parts of the valley to sink.
In some parts of the valley, the land has been dropping by almost 2in a month, according to Nasa satellite measurements.
Land near the city of Corcoran sank 13in in just eight months. Parts of the California aqueduct sank 8in in just four months last year.
The subsidence has already damaged and destroyed bridges, pipelines and roads, and is threatening thousands of miles more.
It is twisting and crushing well casings, and could eventually reduce the underground aquifer’s water storage potential. “Without the water to support those holes, the clays align and you get compaction,” said David Cehrs, a water scientist and president of the Kings River conservation district around Fresno. The situation is far worse in geological formations with more clay than sand, such as on the western side of the San Joaquin valley. 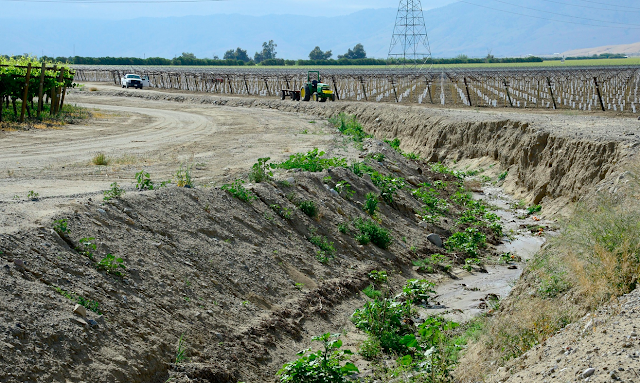 Advertisement
That is, even if El Niño does bring heavy rains, there is no natural way to store the water. “We have lost that water storage capacity forever,” Cehrs said.
•••
On the night before Thanksgiving in 2005, Carey Wilson, who lives in the small Central Valley community of Madera Rancho, started to wash the dishes piled up in her kitchen sink – to find there was only air sputtering out of the tap. She called a service company to lower her well, which was originally drilled at a depth of 258ft. A year later, when that well went dry, Wilson, a single mother and federal government worker, paid $12,000 to drill a new well to 389ft and install a more powerful pump.
But her neighbours, who were facing similar problems with their wells, also started drilling, going down deeper than her well. “They were pulling the plug out from underneath us,” she said. “It was homeowner against homeowner.”
Major farms in the area dug deeper still, often to depths in the thousands of feet. On days when she did laundry, Wilson began to notice the pump kicking on when she was in the shower.
By August 2014, the water table in her area had dropped 18ft. The land had dropped too, twisting and crushing the PVC pipe connected to the well, she said.
“I know the writing is on the wall,” Wilson said. “It doesn’t matter if it rains for 40 days and 40 nights, here the water table is never going to go up.”
Posted by marcus doyle at 07:13